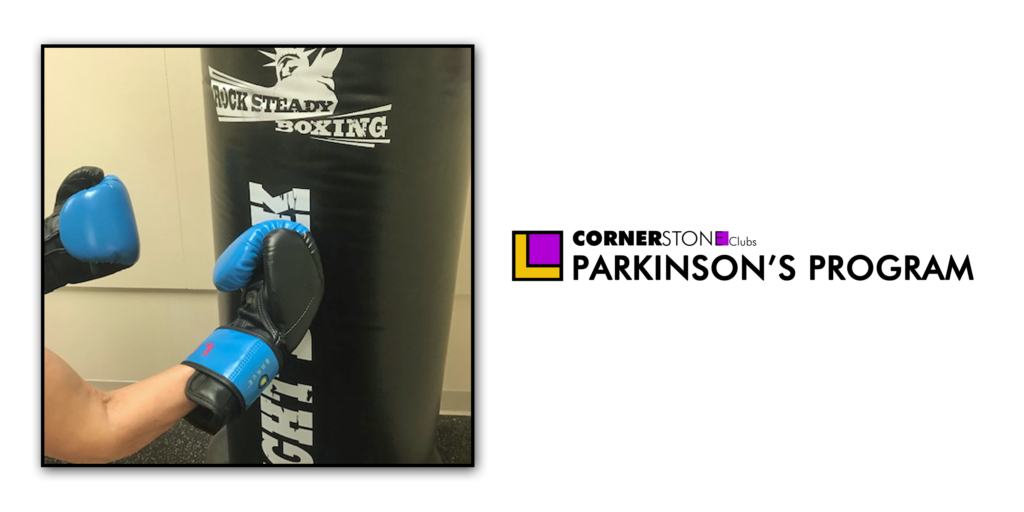 Editor’s note:  It’s been about 6 months since we started the Parkinson’s Program at Cornerstone Clubs.  At this point, we can safely say that’s it’s been a resounding success.  We are thrilled to be able to provide this very important fitness service to an under-served population and felt it was time to start sharing some success stories. So, please read on and enjoy “Lightning’s”  story.

“They call me Lightning and I have just celebrated 6 months with RSB (Rock Steady Boxing)!!! I am really proud of this accomplishment, because when I first started, I didn’t think I would attend the 2nd class.  When I first heard that Cornerstone was starting up the RSB program, I was elated!!  My doctor had suggested that I enroll in an RSB program because studies have shown that it is very beneficial for Parkinson’s patients. So very merrily I went to my first class. I had met the instructors previously whom I immediately connected with because their commitment and resolve to RSB was quite evident.”

Lightning’s story begins on a bright October day. As wide-eyed, uncertain boxers began to fill the room, a sense of curiosity started to grow. With speed bags on the wall, heavy bags on the floor and focus mitts placed on the chair, this boxing idea was becoming more real. Just as real as when their Doctors said “You have Parkinson’s Disease.”

Everyone in the room chose a seat in a circle and waited quietly.  The class started with introductions. First up – the coaches, “I’m Bart and I’m a Boxer. I’m Kristin and I’m a Boxer.” One by one, each participant introduced themselves following the lead of their coaches, not really believing their own words just yet.

“1 – 2 – 3 -4! Jab! Cross! Hook! Hook!” Footwork was taught, punches were thrown, and when the final bell rang after 12 rounds of work, a feeling of major accomplishment filled the air. “BRING IT IN!” the coaches exclaimed.  With hands joined together, a cheesy chant ending with “ROCK STEADY” sealed the deal. We had done it. The first workout was in the books.  As for  “Lightning”, she thought it would be her last.

“I found the first class to be very intense, more so than I anticipated and I went home and spent the rest of the day on the couch because I was literally exhausted!  (I did very little exercise prior to this program, hence the exhaustion!!) My enthusiasm was completely deflated and I sadly went to my next class with the intent of quitting.  Kristin and Bart had previously asked for feedback on how we felt after the first class and I told them how I felt.”

Lightning walked in and handed over her gloves. As coaches, we couldn’t let her quit. Not yet. See, we knew that Lightening was a fighter. We just needed a little more time to prove to her that she was a Boxer. After some conversation, she agreed to give it one more shot. And boy did she ever! “ Jab! Jab! Cross!”  Lightening bobbed, weaved, and danced her way through the second class. At the end of the session, each boxer chose their fight name – “Jabbin’ Joe,” “The Stallion,” “The Hurricane.”  Our fierce fighter, who almost walked away, chose “Lightning” because her punches became electric and her smile could light up the night’s sky (her coaches came up with the second part!).

“They convinced me to give it a chance.  I did and here I am today!!!  I cannot express enough my gratitude for their support, for their commitment, their dedication and encouragement.  I have never felt better or stronger and have become totally committed to my RSB and PWR workouts.  Last, but not least, I have met wonderful folks at these classes and that is an extra bonus!!!”

For more information about the Parkinson’s Program at Cornerstone, click here.